The Baker Dude Vision
Welcome to Baker Dude Bakery Café. We’re committed to helping you enjoy all your bakery café favorites made with the freshest ingredients and offering an array of delicious options to satisfy all diets. Our truly exceptional staff takes great pride in serving you with distinction and entertaining you in the process.
At Baker Dude, we help our guests truly experience all our goodness by offering their bakery café favorites, and a plentiful assortment of delicious options to satisfy all diets, in a friendly and surprisingly entertaining environment. We believe that the best-tasting food starts with the freshest ingredients. We always source the freshest ingredients and work tirelessly in our bakery to ensure our offerings exceed our guests’ expectations on freshness and deliciousness.

You & Baker Dude Give Back!

Through the OneLove Cupcake Outreach Program, we have partnered with Covenant House, a charity organization that helps homeless and trafficked youth in Atlanta. With every OneLove Cupcake merchandise purchase, we donate proceeds from those sales as well as your direct contributions. Together we are giving our youth a safe and nurturing home!
(Shout Out: "The OneLove Cupcake - A symbol of love, hope and happiness." was painted by local Atlanta Artist, David Roper Jr.). 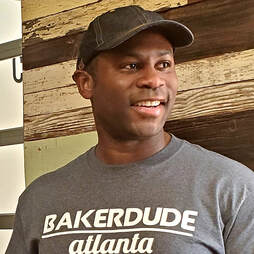 Orran Booher, Founder
Our Story - About the Head Baker Dude: Born and raised in Kingston, Jamaica as the 3rd of 4 children. His parents were interior decorators and taught him the trade. The Matriarch of the family, his mother, baked Jamaican Christmas cakes every Christmas and he was involved in every way since the time he could stand. Once the Head Baker Dude could see over the oven he started baking on his own with a box Pineapple Upside Down mix (I know, a box) and it came out great.

Since the design gene was passed down, he redirected his talents into baking and started to make recipes from scratch and being the systematic person he is, working with recipes was right up his alley. He too began baking Christmas cakes as a teenager to the point where they were more popular than his Mother’s! Since he out baked his mom, he was kicked out of Jamaica (totally kidding) he relocated to the US at age 20. Taking time off he really didn’t start baking again until around his late 20’s where he began working with fondant style cakes.

Enter Food & Wine magazine, the launch pad for his love of euro-style desserts. He started baking cakes for all his colleague’s birthdays. But after years of baking birthday cakes and watching his waistline grow, he began to make mini variations of the cakes, cakes that would fit in a cup… Yes, you guessed it, cupcakes.

In 2012, the name Baker Dude (inspired by the cool name and fellow local ATL company - King of Pops) came to him but it wasn’t until 2015 it became a reality. After resigning from his job in August, Baker Dude was born a month later. Running Baker Dude out of his kitchen under a Cottage Food License, he began selling cupcakes online and when the new year came and everyone was on a diet (until February), he used the time to find a commercial baker so that the supply could catch up with the demand and reach a wider audience - BAM Baker Dude 2.0 at Farmer’s Markets came into sight as well as offering customers more of a variety online as well. When the Farmer’s Markets came to an end for the winter break, we were fortunate enough to land a retail spot at Peachtree Center Plaza and that gave birth to Baker Dude 3.0!

Fast forward to July of 2017 when we said thank you and goodbye to Peachtree Center and hello to SunTrust Plaza landing a new spot operating a kiosk in the Food Court and Baker Dude 4.0 was born. We aren’t done yet! While we are sad to leave SunTrust Plaza after a great year, with great excitement we welcome Baker Dude 5.0 - the Bakery Cafe in August 2018! Our first brick and mortar store at The Beacon Atlanta where we will continue our domination and hopefully with your help became an Atlanta institution! This is our story, and we're sticking to it.
​
Orran Booher – The Baker Dude